Available at http://store.belgianshop.com/special-beers/1998-slurfke-bruin-85-13l.html
Slurfke needs no explanation to anyone who watches television in Flanders. If you keep up with the popular soap called ‘Thuis’ (‘Home’), broadcast daily on Flemish television, you will know all about the adventures of its main character, Eddy Van Noteghem. One fine day, Eddy, who is known for his love of beer, unearths a beer recipe compiled by his late Dad. He invites his group of friends to start home brewing.. The Slurfke is born. The hobby brewers gain first-hand experience of the brewing trade and soon find out it involves far more than they had thought. The Slurfke is a success; the friends purchase a brewery and set up their own business. However, the story does not end well. The friends argue and their joint endeavour is no more. This fictitious beer has now become a reality. Numerous ‘Thuisfans’, as fans of the soap are called, wanted to know where they could taste this beer. This inspired Castle Brewery Van Honsebrouck to start brewing it based on the original recipe from the television series. The name ‘Slurfke’ means little trunk. It is a robust craft beer of the ‘dubbel’ type, dark in colour and perfect as a degustation beer. The addition of roast malts not only provides the dark colour, but also the aromas and tastes of caramel and coffee. The proprietary yeast accounts for fruity aromas of banana and vanilla. 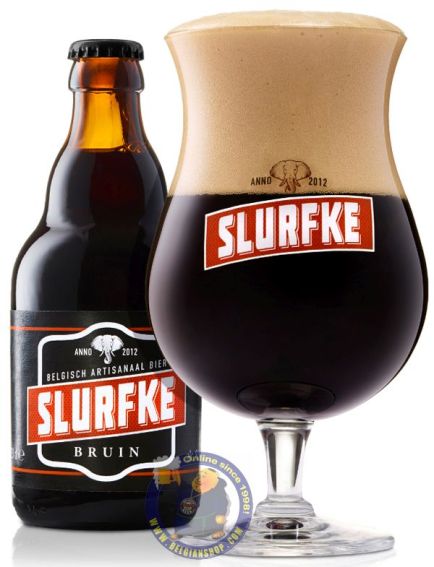