Available at http://store.belgianshop.com/special-beers/2028-rebelse-strop-69-13l.html
Brett yeast
The brewers decided to take a different approach with Rebelse Strop. In particular, they opted for a fairly unusual and stubborn yeast variety: Brett. This obstinate variety causes the beer to continue developing over the course of time. Along with dry hopping, where the hops are added in the fermentation phase, this feature gives the beer a splendid aroma and a fantastic taste.
Tasting Nose/aromas: Earthy aromas merge into a light fruity smell. Flavour: The unruly Brett yeast causes the taste of the beer to keep developing long after bottling. Rebelse Strop that is rather young gets a more complex flavour: fruity, hopbitter and with a subtle acidity. In time, Rebelse Strop gets a slightly softer, rounder flavour.

Available at http://store.belgianshop.com/special-beers/2025-haacht-super-8-ipa-6-13l.html
A new IPA! IPA is the abbreviation for the India Pale Ale beer category: amber-coloured beers with more hops, a higher alcohol content and a bitter flavour. Think you already know what our IPA is going to taste like? Then think again! Because the SUPER 8 IPA is a new, refreshing interpretation of this style of beer.
Hop! In balance
Most IPAs combine a large quantity of hops with a high alcohol content. With its 6% alcohol volume and wonderful citrus and grapefruit notes, the SUPER 8 IPA is even more refined and balanced. This means that you get all the characteristics of the style, without these being taken too far.
ABV: 6%

Available at http://store.belgianshop.com/special-beers/2023-eutropius-kataklysm-st-tabarnak-666-13l.html
St. Tabarnak is the result of the collaboration between Brewery Eutropius and the Canadian death metal formation Kataklysm. Tabarnak, derivative sland of the holy word « Tabernacle » from the Catholic Church, is commonly used as a swear word by French-speaking Quebecers. The word is used as an interjection to express the intensity of an emotion, most commonly anger or astonishment, but can also take shape as a noun. The St. Tabarnak is a fine blonde Belgian beer with a divin taste which should satisfy even the finest palates. It will tickle your taste buds with its sweet coriander aromas. Thou shalt honour thy beer by drinking it to its last drop, and for the love of God, when your bottle will be empty, order another St. Tabarnak!

Available at http://store.belgianshop.com/special-beers/2022-scheldebrouwerij-oesterstout-85-13l.html
What a nice brew! A really dark brown beer with a nice beige head. Beefstock, roasted malts, dried fruits and some alcohol in the aroma. The flavor is much the same, with more emphasis on the roasted malts, tending towards coffee. Also raisins and prunes, beef-stock and some alcohol. Coffee-like finish with bitterness of the same kind. Medium mouthfeel.
Good drinking, enough complexity to savour each sip. Easily a dessert beer, not for the likings of your average. Very enjoyable Stout

Available at http://store.belgianshop.com/special-beers/2021-philomene-florale-55-13l.html
Philomene Florale is a product of the micro-brewery « Brasserie du Clocher » ; literally « Brewery of the Bell Tower”. Indeed, this brewery resides in a totally refurbished former church that was abandoned and in a serious disrepair state.
Philomene Florale is a light blond beer that has a well-balanced flourish and fruity flavour with a crispy finish which serves perfectly its primary goal: to get rid of your thirst. It is produced according to the traditional Belgian beer method from top quality ingredients and with passion.

Available at http://store.belgianshop.com/special-beers/2019-ter-dolen-armand-7-13l.html
A fruity blond beer with an explosion of citrus, resulting from dry-hopping with the American hops breed Cascade. In order to maintain the hoppy aroma as much as possible, the beer isn’t filtered. It is slightly cloudy and has a snow white head. It is served in a robust, accompanying glass. At the first international Belgian beer contest, the Brussels Beer Challenge, Armand Ter Dolen won a gold medal. The beer was created in honour of Ter Dolen’s co-founder Armand Desplenter, the father of current director Mieke Desplenter.
Hazy golden color, with nice white head. Aroma nice american hops, fruity. Medium body. Taste good fruits from the American hop, nice bitterness, dry end. Recommended. 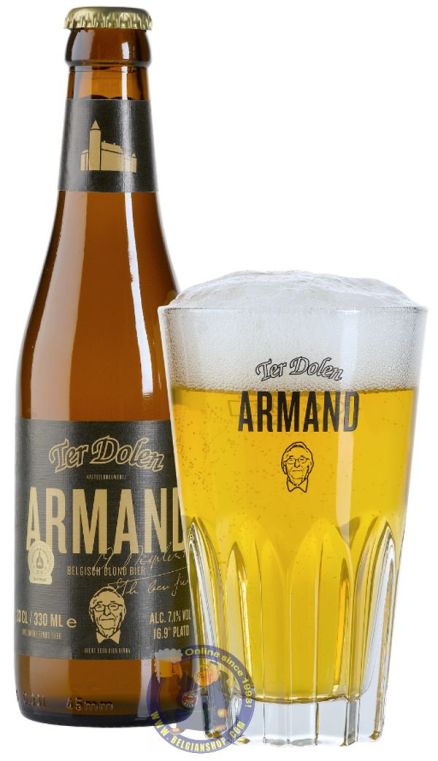 Available at http://store.belgianshop.com/trappist-beers/2018-the-grande-reserve-barrel-aged-rum-2017-34l.html
Chimay is presenting its new edition of the “Grande Réserve” barrel aged. An exceptional beer which has benefited from a triple fermentation and a prolonged maturation in oak rum barrels. Unpasteurized and unfiltered, this beer offers an inimitable round and woody flavor. (10,5%)
This vintage beer has a woody aroma with a few mild notes of vanilla. It also reveals ester aromas (banana, pear, apricot).
To the palate, it is a rounded, creamy beer. Amongst its sweet and roasted accents, it shows perfect balance, despite a higher alcohol content than its predecessor. Its refined sparkling properties add the finishing touch to the unique character of an exceptional product.
64% of the oak-barrels are sourced from France and 36% from America. This batch n°1 is 10% alc. vol.

Available at http://store.belgianshop.com/special-beers/1982-goliath-tripel-9-13l.html
Voted the ‘Best Belgian Blond Beer of Wallonia’ in 2012, and one of the ‘Best Belgian Triples’ by the trade magazine Vino. Goliath is brewed according to the traditional method used by our ancestors with the finest malts and hops. With its rich balanced taste, Goliath triple is a source of vitality and strength that will delight the true beer connoisseur.
Ath, Belgium, the City of Giants, is famous for its annual Parade of Giants. Every year, Goliath – whose name is pronounced ‘Gouyasse’ in the local dialect – leads the parade. The Brasserie des Géants (Giants’ Brewery), in Ath, didn’t think long before naming its first brew ‘Gouyasse.’
Goliath is 9% alcohol by volume, a little more red in the face than your average tripel (almost an amber, really), nicely balanced with a bracing hop note versus a solid malt wallop. Goliath is the only Tripel in Belgium that is all-malt – without any sugar or other additives in. (Everyone else uses some sugar to ‘thin out’ their Tripels, which gives them alcohol, without the body that you normally get from malt.) That means Goliath starts out a bit sweeter than some, but over time, as the live yeast in the bottle do their work, it gets drier and more punchy. The first batch, after about half a year in the bottle, is about where we want it, but it will probably become a greater beer as time goes by. We recommend that you check in on Goliath every once in a while.

Available at http://store.belgianshop.com/geuze-lambic-fruits/2016-arthurs-legacy-06-belle-helene-7-34l.html
This beer has been released by the fruit master Filip Sneppe and he is extremely proud of this brew! Filip Sneppe: “Bewed with fruit, home grown Belgian pears and a subtle hint of cinnamon this beer is a must try.” “Why pear, you may wonder?” Ask Hélène. Join the legacy. Pretty clear golden body with a white head. Aroma is moderate malty, sweet malt, pale malt, moderate yeasty, sweet yeast, bubble gum, pear, alcohol, cinnamon. Flavor is moderate sweet with a average to long duration, bubble gum, sweet malt, sweet yeast, cake – cookie, pear, cinnamon. Body is medium, texture is oily to watery, carbonation is soft.